Scholars apparently still argue as to when World War II started - with the 1931 Japanese invasion of Manchuria? - 1936? - perhaps 1939. - Kiwi Author of  SEARCHING For CHARLIE Tom Scott notes that there is an argument that WW II was actually a continuation of the First World War after a long intermission ..

New Zealander Captain Charles Hazlitt Upham VC and Bar is the only warrior ever awarded TWO Victoria Crosses For Valour in WW II. 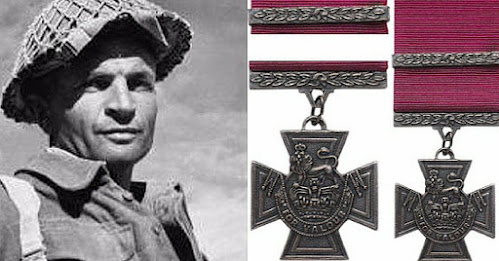 Military historians state that if there was such a thing as natural justice in our world .. Charlie's military record would fully justify the award of some Eight Victoria Crosses.

Charlie Upham was a killer. He was such a killer of German WW II enemy soldiers that when he died .. 49 years later in 1994 aged 86 - the German Association of former Afrika Korps placed a respectful death notice in the NZ Christchurch Press. 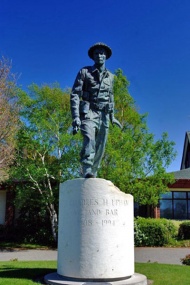 Charles Upham Memorial Statue in My Local Town Amberley Hurunui:
Captain Upham had a habit of carrying a pack filled with the grenades he used to attack and destroy enemy machine gun teams.
- His wartime bravery has resulted in some modern opinionated people claiming that Upham was a psychopath. 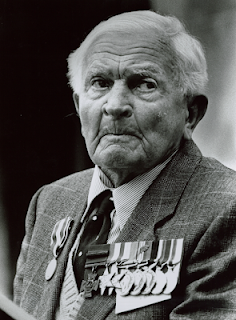 As a POW his defiant behaviour and repeated escape attempts resulted in his being classed as dangerous with solitary confinement and transfer to Oflag IV-C Colditz.
- However fact shows that civilian Charlie was a peaceful New Zealand farmer.
In today's New Zealand it is likely that he would have had any lawfully owned firearms prohibited and destroyed.
Marty K.
USE YOUR 'PARTY  VOTE' CAREFULLY - as votes for an "Also Ran" Party are redistributed & counted for other successful parties in a NZ Election.

I had met with Charlie Upham on several occasions and he was a hard case but a thoroughly decent bloke.  You will be pleased to know that his grenade bag (made from goatskin) has survived and is in the possession of a Christchurch collector along with some other pieces of his memorabilia.  The bag is roughly the same capacity as a gas mask bag and would have held a dozen grenades easily.  It looks a bit like a leather shopping bag.

Charlie came to Cheviot in 1974 to open the Running Boar range and brought his old Springfield .22 5 shot bolt action to fire the opening shots.  He fired 4 shots, 2 in each direction, and scored no hits.  His only comment was “The bloody Germans couldn’t run that fast!”