The American Military have made them, - and The Russians (& USSR) also have them.

I have designed and patented such a cartridge for standard unmodified handguns:
NEW ZEALAND PROVISIONAL PATENT APPLICATION No. 720642

Both nations used the system of a CAPTIVE PISTON CARTRIDGE - The US's being a small shot-shell firing 15 balls - while the Russian guns use a single heavyweight projectile.
It is possible to design and produce a handgun system that fires VERY quietly .. having only the sound of the guns mechanical action and firing pin strike.

You do not need a bulky screw-on 'silencer'.

NO Noise
NO Blast
NO Flame
NO Flash 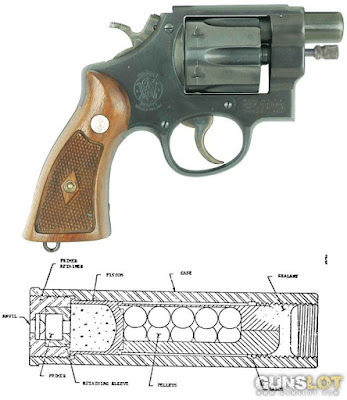 The Russians have also adapted multi-barrel handguns and semi-auto pistols to use these captive-piston cartridges.

This technology is a proven & working reality - it is not science-fiction.. this is fact.

A major issue with both of these existing military special purpose firearm systems is the non-standard form of the cartridges and the expensive specially made firearms to use the silent ammunition.

My design or invention incorporates elements from previous designs into a new production design cartridge in various calibers that will fit into existing handguns such as 357 Magnum..

The above images are from the patent documents.

Key features are the piston retaining 'shoulder' formed over a steel annular ring, the stepped diameter projectile, and the polymer piston material formulated to slowly release the retained pressure after firing.

A secondary feature is that the "quietness" may be adjusted to an acceptable loudness level if 'silence' is deemed unlawful (- by use of a secondary primer inclusion).

This 'safety' cartridge will help eliminate flinching by shooters. - 80-85% of all US police shots fired miss their intended target.

The sub-sonic bullets may be produced lead-free & frangible if desired.

No US ammunition maker approached has indicated interest. - In fact - no US manufacturer has even had the courtesy to respond to my letters detailing & including this patent.

- Any ideas out there to help progress this design? - Interested?

Marty K.
After researching & writing 1,036 blogs I've got something NEW to try .. I've signed-up to Patreon. - In over five years I've not made one cent from this .. NOW you can send me a wee support $ - starting from $1. to get all this stuff from New Zealand - over a year that's nearly the price of one Shooting magazine. - Am I worth it?
https://www.patreon.com/user?u=16618870