Some citizens might think that it's hypocritical and dishonest for the person determined to disarm all New Zealanders .. herself  to have FOUR armed police guards on duty 24 hours a day.

HER security is assured. 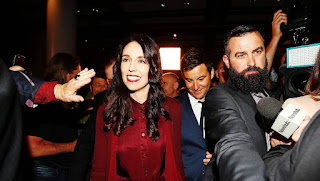 "When Ardern is home during daylight hours, neighbours describe up to four DPS agents guarding her modest two-bedroom home from the street. Two of them sit in an unmarked SUV with the engine running, while another two sit in separate unmarked cars."

Now - I don't object to our 'Supreme Leader' having security .. because guns are good - but I strongly object to her personal police force wrongly insisting that I have no right to own any firearm and that if I - at 75 years of age - am worried about my self defence I should contact the Citizens Advise Bureau to see if my local Council runs any "empty-hand" training ..

"Their sole focus is obviously Jacinda's house, but you do feel fairly safe with them around. It's quite hard case watching her go for a walk. You've got two guys with her on foot and then the SUV follows her as well."

DPS officers are constabulary members of the police, trained in hand-to-hand combat and armed. "I've become quite friendly with some of them. I don't have to lock the door," said a neighbouring woman.

"We hold these truths to be self-evident, that all men are created equal, that they are endowed by their Creator with certain unalienable Rights,"
Thomas Jefferson  1776.


.. Article 7 of our British AND New Zealand Bill Of Rights clearly states:
Bill of Rights 1688 (February 13).

" Subjects’ arms. That the subjects which are Protestants may have arms for their defence suitable to their conditions, and as allowed by law:"

- By the passing of the (NZ) Imperial Laws Application Act 1988 - the British Bill of Rights, unmodified, became part of New Zealand law.