The First Generation "TERRORIST" Glock 17 WAS NOT "The First":

It really is a funny old world eh .. Just 4% of the worlds population seem to think that THEY ARE THE WHOLE WORLD & whatever they think rules everywhere.

The Glock "First Generation" model typifies how U S models designation can become 'the standard' ... something like "The Big Mac Index" - where the cost of a U S  hamburger is used to measure national economies around the planet (PPP - Purchasing Power Parity). 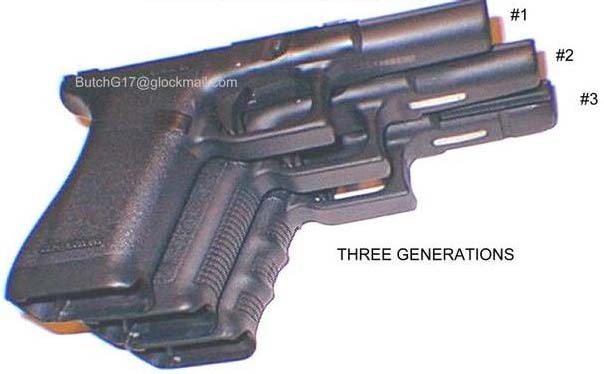 The true original 1st Generation Glock 17 did not have any serial number on the bottom of the polymer (Nylon) Frame .. I think a few U S gun writers now recognise that there is a generation prior to 'Gen 1' that they might call the "Austrian Army Model" - but that was actually sold worldwide before Glocks were imported into America. 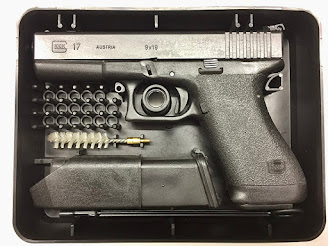 The original G17 was serial numbered on both the slide and breech of the barrel but did not have the metal insert moulded into the pebble textured frames. Those first models had a smaller diameter barrel than later ones and their magazines did not have the folded steel liners & these bulged when loaded and  did not drop clear when released. - Glock Ges stated that these swollen magazines - that would not eject clear were an intended design feature - but they soon redesigned and re-enforced them to meet American expectations.
"First Generation" Glocks are merely the model that was modified to meet the U S BATFE Import regulations:

Soon after the 1968 Act, what is now the Bureau of Alcohol, Tobacco and Firearms (BATF), Treasury`s agency with regulatory authority over firearm issues, adopted "Factoring Criteria" to be used to determine whether a given handgun is eligible for importation under 925(d)(3). Under the criteria, a handgun must meet certain "prerequisites" and achieve a sufficient number of points under a "point system" which awards points based upon a handgun`s overall length and height (pistols) or frame length and barrel length (revolvers), weight, caliber, frame construction, safety-related features, and miscellaneous equipment such as target sights and grips.

Despite the "sporting language" in 925(d)(3), BATF`s criteria are in some respects weighted against handguns with well-established sporting credentials. As examples, the fact that a handgun uses .22 caliber ammunition earns it relatively few points, though more target shooting is done with .22 caliber handguns than with those of any other caliber. A pistol receives 10 points for having a double-action trigger mechanism, though single-action pistols dominate many long-established target shooting activities. A pistol receives points for having a target trigger and external hammer, though most .22 caliber pistols designed for target shooting do not possess external hammers.

The real reason that Glock's latest model the G44 is made in Smyrna Georgia is that as a striker-fired .22" rim fire model - it does not score enough points to be imported.

- You know that many leaders and journalists falsely state that America has no firearms restrictions or ownership limitations - whereas there are many gun laws there .. including the Federal Law that forbids any FELON from possessing any cartridge firing gun.

.. Mind you .. these same anti-gun "journalists" & politicians said that Glocks were "ceramic pistols" that were terrorist weapons - undetectable by x-ray.

The first Glocks arrived in USA in early 1986 - but the guns were designed by the Glock factory team in 1980 and replaced the Austrian Military's previous service pistols in 1983-1984.

- There is SO MUCH marketing myth & PR that becomes "fact" that we all need to check what we believe in life.. Colt's Single action Army model M1873 "Peacemaker" was designed by WILLIAM MASON .. 11 years after Samuel Colt died.

America's satellites have for years been lifted into orbit on imported RUSSIAN built rockets - If you don't like what I'm telling you - CHECK OUT THESE THINGS YOURSELF.

Current New Zealand's Firearm's Laws have been altered to cover-up Police and Government failings and are being used to punish law abiding shooters who have proved that they are 'FIT & PROPER'.

How many Politicians or UNLICENSED armed police officers can qualify as 'Fit & Proper'?