I'd never really thought about this D/A aspect .. and I definitely don't pretend to know anything much about them .. but there does (or do ?) - seem to have been at least a couple of  DOUBLE-ACTION PERCUSSION Revolvers. The STARR - and the early Adams and Beaumont-Adams.

Starr are said to have produced nearly 25,000  Model 1858 D/A percussion revolvers in .38" and mostly .44" caliber around the US Civil War period (1861-1865) - before changing-over to a single-action model to meet the US Ordnance Departments requirement for a S/A.

But the English first model Adams with a long trigger pull dates from some years earlier in 1851 - and was double-action only. This was then remodeled into the Beaumont-Adams in 1855 which worked both D/A and S/A cocking with a hammer spur. 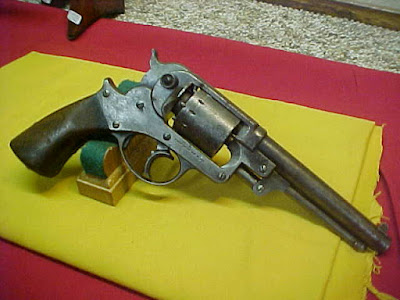 Starr changed to a percussion single-action iteration in 1863: 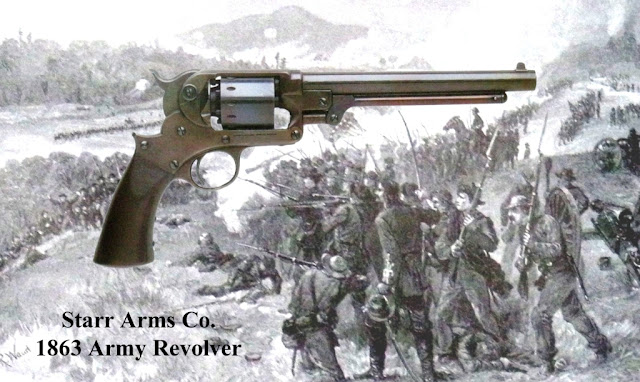 It seems that the Military "pundits" of the time were unimpressed by the long trigger pull needed to fire the double-action revolvers.

- This preference to fire even today's modern D/A revolvers in single-action hammer 'cocked mode' is still very apparent on any pistol range.. I guess that a more precise outcome can be achieved eh but personally I'll stick to training double action only.

So there you go,

I get a lot of laughs & satisfaction from shooting my single-action Ruger Old Army percussion revolvers and these .44"s can be surprisingly powerful and accurate .. but to ride or to have been marched into combat relying on those tiny copper caps to work every time when needed must have been nerve racking. - But much better than those even earlier flintlocks.
M.K.
Posted by Marty Kavanagh at 11:13