The not-very-well-known .32" Longue French auto pistol and it's cartridge pointed me straight to the earlier American Pederson Device from 1918.

When WWI ended before the USA was ready - All the Pederson Devices, magazines, ammunition and rifles were subsequently placed into storage - but were later declared surplus in 1931 - and to prevent them from falling into the public's hands, nearly all of them were destroyed by the Army - except for a few examples kept by the Ordnance Department.

- Fewer than 100 Pedersen devices escaped this wasteful destruction to become very rare collectors' items. They had a big bonfire.

The Pedersen Device was a secretly developed attachment for the M1903 Springfield rifle that allowed it to fire a .30 caliber (7.62 mm) pistol type cartridge in semi-automatic.

The device fitted to modified Springfield infantry rifles - with an ejection slot machined into the left-hand side of the action - converting them into a rather long 'sub-machine gun'. 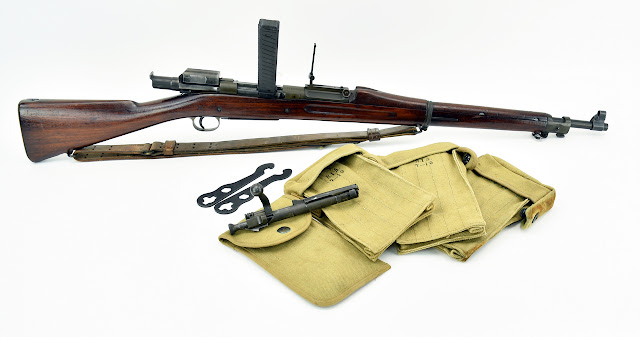 The US built 65,000 of them (plus 1.6 million magazines!) only to have WWI end before they could deploy them into the European trenches. - Here is a link to a Forgotten Weapons video explaining the Pederson Device: 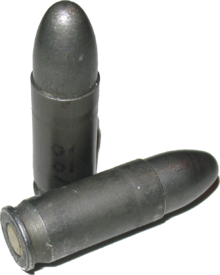 The French military saw this cartridge at the end of WWI - and were again shown it in a carbine by John M Browning in 1920. - They liked the powerful but low-recoiling round & had a sub-machine gun - the MAS 38  and two pistols designed for it:

The models 1935A and 1935S are two separate pistols - both designed in response to a 1935 French military competition, and were intended to become the standard French military sidearm. Unfortunately, production, which began in 1937 was run-over and disrupted by the start of WWII. 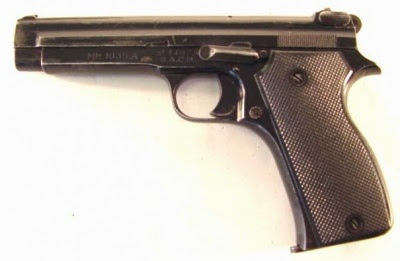 These Longue caliber pistols continued in use with the Gendarmerie and the military up till 1970.. It was quiet a hot round originally pushing it's 8x 80 grain rounds out of the magazine at 1,300 ft per second but slightly down-loaded Ooh-la-la for the pistols.

The correct 7.65x20mm ammunition for these pistols would currently be hard to find .. although some owners say that ordinary .32" ACP (7.65 x17mm) can work in the guns. - Hand loaders using modified 32" S&W Long cartridges can struggle to crimp the proper slightly smaller .309 inch bullets securely into the cases meant for .312" bullets.

After researching & writing 1,036 blogs I've got something NEW to try .. I've signed-up to Patreon. - In over five years I've not made one cent from this .. NOW you can send me a wee support $ - starting from $1. to get all this stuff from New Zealand - over a year that's nearly the price of one Shooting magazine. - Am I worth it?