What's a 'RUPERTINOE" Cannon Then?

Well for starters .. the name "RUPERTINOE" is a typical British cock-up - in that it's a mistake when copying what was actually written into one guns surface ' RUPERT inv '. 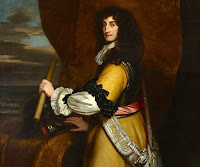 
Designed by Prince Rupert of the Rhine 1619-1682, an experienced naval commander and senior admiral of the Royal Navy - the gun was intended for use against the Dutch during the Anglo-Dutch Wars.
The Rupertinoe was a high specification, annealed and lathe turned gun made experimentally - at Rupert's foundry at Windsor Castle - reflecting his scientific interests in metallurgy— he was the third founding member of the Royal Society.
He had the cast iron guns heat treated so that the bore might be precisely turned or machined to have a reduced windage so that the cannon balls fit more closely and didn't bounce about so much as they accelerated up the barrel and flew on towards their target.
This design is notable for having a reduced diameter truncated cone powder chamber and possibly .. the bores were engineered to tighten-up as the ball nears the muzzles.
These machined cannon were lighter and superior to most others of the day .. but they cost much more to produce .. so soon fell out of favour.
Links to very good information:

- Now of course you all are thinking .. "Where's the pictures?"

Here's your homework for today. - If you can find any true image of a Rupertinoe or even those iterations made by John Browne that are called 'DRAKES' - I've got more than one bottle of Irish Whiskey or even a single Malt whisky that I am happy to share with you up here in the Canterbury hills of New Zealand.

The below images are said to be of a John Browne demi-culverin  DRAKE cannon found in Bermuda West Indies 2009: 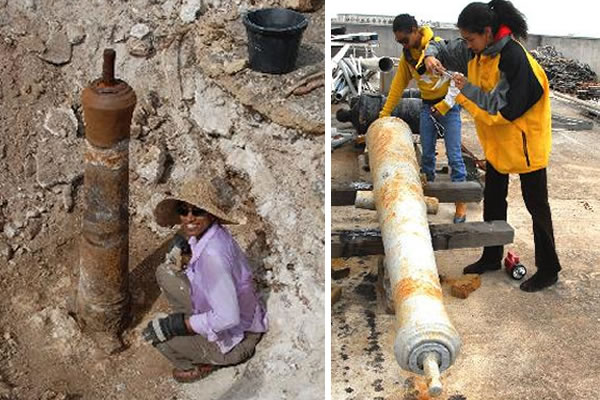 .. it may (or may not) be a kind of Rupertinoe .. funny stuff history.


- I blame it all on the Chinese (Song dynasty) eh.(They started all this GUN stuff)

.. I've signed-up to Patreon. - after five years writing now you can send me a wee support - starting from $1 - for all this stuff from exotic New Zealand  .. yes most everything here is indeed EXOTIC .. apart from those interesting native birds eh.