Being again bored by the T.V. - I picked-up my paperback copy of  'Guns of the Old West' by Chapel - and came across the brief entry for the 1859 Walch percussion revolver.

12 nipples for capping gives the clue that the cylinder is long for a reason. 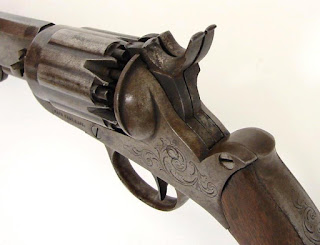 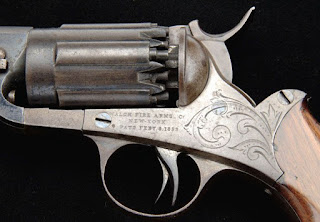 Two Triggers too.
Load each chamber with powder and a .36" bullet - preferably a tight fitted one - then do it again.
- Cap each of the twelve tubes or 'nipples' then when ready - you may cock both of the hammers. A continuous pull causes the front (right-hand) trigger to fire the front charge and ball - then the second (left) trigger squeezed fires the rearward charge/ball in the same chamber.
- Repeat the double cocking five more times to fire all superposed  balls in a controlled aimed sequence - that's twelve shots.
Built in 1859 and 1860 - only some 200 were made by the Union Knife Company(12 shot) & J P Lindsay (10 shot Pocket Model) for John Walch. - The ten shot revolver was in .31" calibre - made in greater numbers - some 2 / 3 thousand perhaps?. 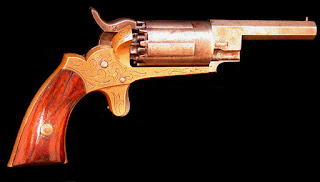 Walch 10 shot Pocket Model has a 'spur' trigger
- that is pressed twice?

These guns were expensive, low powered, liable to multiple discharge, and prone to corrosion due the difficulty of cleaning the drillings properly. 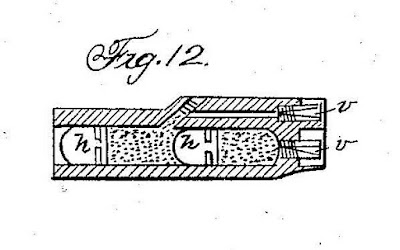 Walch Chamber Detail.
Drawing shows one chamber and the flash-paths. The bullet h details the grease groove that was meant to compress and squeeze-out the grease when rammed - sealing against accidental double discharge.
It didn't always work as planned .. maybe a good wad would be effective in a modern stainless steel copy - how about it  Uberti, - Ruger?
Marty K.
Posted by Marty Kavanagh at 14:25